The international feel continued into the evening as Michael Christie and Deborah Willis followed their excellent interviews with readings from their short story collections.

Michael took to the stage first, thanking the organisers and audience for the invitation to such “an idea-loaded, committed and vibrant festival…” Michael jumped straight in with an excerpt from Emergency Contact; an unusual and intriguing story about a lonely woman in love with a paramedic, who phones 911 compulsively in hope of bringing the paramedic to her house. We pick up the story at a point where she’s lying on her back, (“the rowing slave in the galleon of my body”) faking recovery from a faked heart attack, trying to find a way to make sure that she isn’t exposed as a fraud so that she can continue with her ploy. Through the interaction between the desperate woman and the exasperated paramedic, Michael masterfully interweaves various aspects of the human condition; hope, fear, weakness, unexpected strength and power struggles. With careful observances and insights into his characters (“I paused because pause means deep consideration”), a beautiful command of language (“they teetered on my eyes like cars do on cliffs in movies”) and fabulously sharp dialogue (“I’m going to stop myself breathing” “And how will you do this?” “With my mind”), Michael drove the story forward at an exhilarating pace; stopping before the end to leave the audience hungry for more.

Continuing with an entire piece, The Quiet, Michael displayed more of his deep insight into the complexities of human nature. This story focused on the relationship between a driving-obsessed boy who “as long as he’d remembered, he’d found contentment in the world’s quiet places…” and his louder, gang-member brother. The story explores violence, necessity, expectation, and how the past can shape the future, amongst other themes. Culminating in a chance meeting in a gas station between the boy and a middle-aged woman, the story brings you on an unexpected road trip, revealing a glimpse of the value of an unlikely friendship; a friendship which brings momentary respite for both characters. In moments, “the roads empty as black sheets of paper” seem to shift and you witness the pair evolve, with “dawn lifting shadows from the weary shoulders of everything”. Michael certainly gave the audience a taste of why he has gained so much acclaim for his “strong and vibrant” debut collection, demonstrating his ability to address “the human condition in a way rarely seen in literature”, where his characters “become your new friends”. 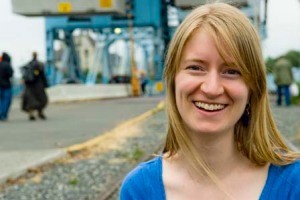 Deborah Willis followed with a contrasting story, The Weather, set in a rural environment. Written in two voices (an older man, Brayden, who is a rancher and his daughter Edith), the story examines the developing relationship triangle involving a father, his daughter and the daughter’s new friend. Set against an amazingly interwoven backdrop, filled with a “blush of trees” and drastically changing weather, Deborah unfolds the depth and drama of chance encounters and how human beings affect each other in the most unexpected of ways. The story began with the first time Edith meets the unusual girl, (“I asked her if she was lost and she said she was lost on purpose…”) and then moves to when she brings her new friend home. The new friend is immediately portrayed as a girl that the father neither likes nor approves of, who is “built like the spindly birch we use as windbreak”. However, as the story unfurls, there is a shift in attitudes and an air of something almost sinister unfolds as the father falls for the girl.

Through the twin voice structure, you gain a keen insight into each character’s understanding of events; their helplessness, desires and hopes at the time of the event, combined with their vision of self and others which has been altered by time. Cleverly contrasting the two voices, using dialogue and imagery which reflect their years, as well as their understanding of the world, you get the feeling that neither of the narrators have any control over events; they’re being powered along by their own unexplored natures, like the environment they live in, with the clouds that “spooled and unspooled themselves”. Together they’re unwittingly faced with the effects of the tornado-like friend. We follow the father and daughter as they are helplessly driven along by chance events and they struggle to make sense of events outside their experience. The innocence of his daughter combined with the helplessness of her father creates an overwhelming sense of how no event can ever be completely controlled, or witnessed in the same way by any two people. Deborah had the audience hooked, displaying her talents as “one of those writers that make fiction feel less of a genre”, laying bare the powerful consequences of our choices.

An excellent reading in terms of both mastery of the craft and delivery; and an outstanding example of Canadian short story writing talent.